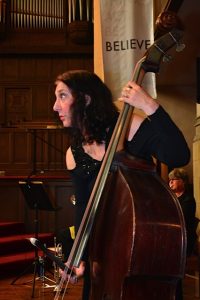 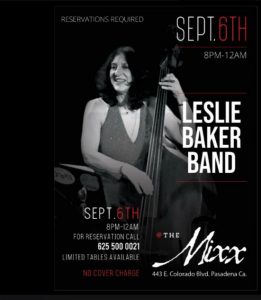 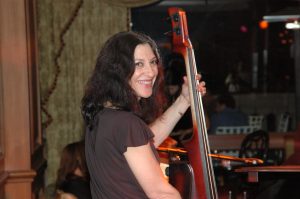 Bassist Leslie Baker, born in Los Angeles  has been involved with music from an early age.  Her Father, Dick Baker was a professional pianist and vocal coach.  He started her on piano and reading music at age six.  By twelve on his suggestion and encouragement Leslie began playing upright bass. Very shortly after that she was performing on bass with her Dad at his gigs. Leslie plays electric and acoustic basses, sings, composes and arranges music. Her self-produced CD’s on her label Ranch Cabin Records display all these talents in a variety of settings.

Original music by Leslie, a tribute to my hometown’s history:

Honored as a Living Legend of Jazz and Blues in 2017 Leslie continues to perform in a wide variety of venues. She is a currently member of the Caltech Orchestra and LA’s OWN LAPD concert and swing band, co-leader of the chamber group Transcendence and leads the Leslie Baker Band. In addition to being a busy sideperson, as a bandleader Leslie books the Leslie Baker Band and the chamber group Transcendence for special events, concerts, workshops, recordings and shows.  The reviews from clients are consistently positive.

Here’s an original song for a dear departed bandleader Bobby White who I worked with at the Lighthouse Cafe Hermosa Beach performed by the Leslie Baker Band:

Leslie continues since age 20 to support herself as a professional musician.  Versatility and continuous growth are some attributes of Leslie’s musicianship that her large network of musician friends, teachers and co-workers have noticed. Leslie considers the great Red Callender to be her most important mentor.

Long tenures in the bands of Al Aarons and the L.A. Jazz Caravan (Count Basie/Studio trumpeter) and sixteen years with bluesman Floyd Dixon (songwriter Hey Bartender, Operator 210, Jump Piano/Vocals) have afforded numerous festival and recording opportunities.  A particular highlight among many festivals with Floyd was the Monterey Jazz Festival. It resulted in a recording “Live at Monterey”. “Wake Up and Live” another collaboration with Floyd Dixon won the John Handy Award.  Another highlight is playing in the string section for the Dave Matthews Band when they closed their 2018 tour to a sold out Hollywood Bowl.  It was the 1st time the band added a whole string section.  Leslie was the 1 string bass in the section. 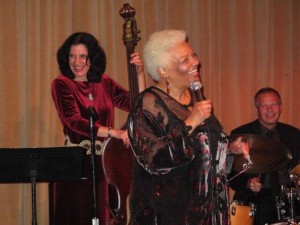 In her effort to spread the love of Jazz and live music to young people Leslie has been on staff at Jazz America, an after school program started by Buddy Collette for middle school and high school and the Los Angeles Jazz Society Jazz in Schools program since it’s inception with Al Aarons and the Jazz Caravan, then as a part of Maestro Delbert Taylor‘s band and currently continues as the bassist in Bobby Rodriguez Jazz in Schools band. 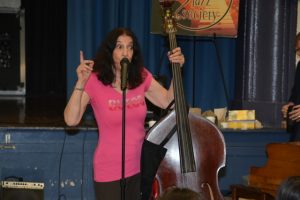